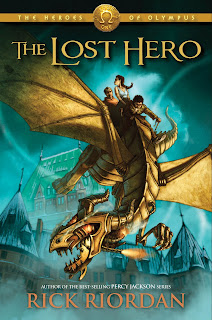 Jason has a problem. He doesn’t remember anything before waking up in a bus full of kids on a field trip. Apparently he has a girlfriend named Piper and a best friend named Leo. They’re all students at a boarding school for “bad kids.” What did Jason do to end up here? And where is here, exactly?
Piper has a secret. Her father has been missing for three days, ever since she had that terrifying nightmare. Piper doesn’t understand her dream, or why her boyfriend suddenly doesn’t recognize her. When a freak storm hits, unleashing strange creatures and whisking her, Jason, and Leo away to someplace called Camp Half-Blood, she has a feeling she’s going to find out.
Leo has a way with tools. When he sees his cabin at Camp Half-Blood, filled with power tools and machine parts, he feels right at home. But there’s weird stuff, too—like the curse everyone keeps talking about. Weirdest of all, his bunkmates insist that each of them—including Leo—is related to a god.
Join new and old friends from Camp Half-Blood in this thrilling first audio book in The Heroes of Olympus series.

Well first off let me just say I fell in love with Rick Riordan's Percy Jackson and the Olympians series. So of course I had to check this one out because it's basically the sequel or whatever you want to call it to that series. Ok now on to the review, first off(again) I love the cover of this book I think it's so pretty.

Now the book, first of all the characters. I felt connected to all of them but I especially felt connected to Leo. Just something about the way Riordan described his feelings you felt like you were inside Leo's head it was amazing. Now personally I like Percy better than Jason, but don't get me wrong I liked Jason too. Piper, I really really liked her when I first started reading the book I thought she was going to be kind of a weakling. She proved me wrong. I think Annabeth and her are so similar in that sense that they can take on whatever the gods throw at them.


The actual book was good but getting closer to the end I was getting a little weary of all the fighting. They ran into problem after problem but that's just a demigods life. Anyways before I finished the book last night I ruined the ending for myself because for some reason I don't like surprises in books at the end. I know I know I'm an oddball :). The ending was amazing I was still in shock and just couldn't stop gasping. I really really want to tell you guys the last sentence so if you don't want a SPOILER look away: "Percy Jackson is at the other camp, and he probably doesn't even remember who he is." So anyways yeah that was the ending I thought it was actually a pretty good cliffhanger let me know what you guys think :). Well that's it for now thank you for reading this!And yeah for my first review!!


Update 6/17- There will be a total of five books in the Heroes of Olympus series!
Ashlinn :)

I absolutely LOVED these books, and I'm eager to read Son of Neptune when it comes out!