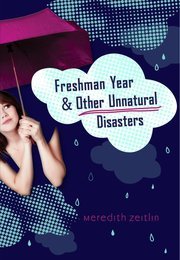 Freshman Year&Other Unnatural Diasters
by Meredith Zeitlin
Published by:Putnam Juvenile
Released on:March 1st,2012
Pages:288 hardcover
Buy here
Kelsey Finkelstein is fourteen and FRUSTRATED. Every time she tries to live up to her awesome potential, her plans are foiled – by her impossible parents, her annoying little sister, and life in general. But with her first day of high school coming up, Kelsey is positive that things are going to change. Enlisting the help of her three best friends — sweet and quiet Em, theatrical Cass, and wild JoJo — Kelsey gets ready to rebrand herself and make the kind of mark she knows is her destiny.

Things start out great - her arch-nemesis has moved across the country, giving Kelsey the perfect opportunity to stand out on the soccer team and finally catch the eye of her long-time crush. But soon enough, an evil junior’s thirst for revenge, a mysterious photographer, and a series of other catastrophes make it clear that just because KELSEY has a plan for greatness… it doesn’t mean the rest of the world is in on it.

Kelsey’s hilarious commentary throughout her disastrous freshman year will have you laughing out loud—while being thankful that you’re not in her shoes, of course…

This was such a cute and fun read! Kelsey is a relatable character to any teenage girl out there. Her friends were also so funny! I mean every teenage girls has gone through at least one of the embarrassing moments in life. I mean I have my fair share, I embarrass myself daily. No joke. I loved that it started off just when she was starting high school and then her first day because I'm a freshman too! Although none of the crazy stuff has happened to me yet it did make for some exciting moments. I can relate to Kelsey so well because going into high school is such a scary thing, I was scared out of my pants the first week! But high school is awesome and super fun if you make it that way.


I thought this book was very well written and is a must read for incoming freshman or girls in high school. I rate this 4 out of 5 stars! Check it out.

Oh yeah, I embarrass myself daily too :L This sounds like a great read, so glad you're back, we all missed you! :D

Aww thanks Rachel,I'm glad your back to and I missed you :))