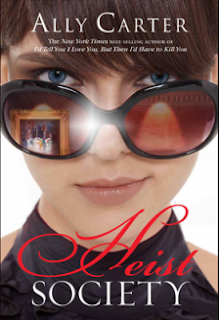 Heist Society by Ally Carter
Published by: Hyperion Book CH
Released:February 9th,2010
Pages:287 Paperback
Buy here
When Katarina Bishop was three, her parents took her on a trip to the Louvre…to case it. For her seventh birthday, Katarina and her Uncle Eddie traveled to Austria…to steal the crown jewels. When Kat turned fifteen, she planned a con of her own—scamming her way into the best boarding school in the country, determined to leave the family business behind. Unfortunately, leaving “the life” for a normal life proves harder than she’d expected.

Soon, Kat's friend and former co-conspirator, Hale, appears out of nowhere to bring Kat back into the world she tried so hard to escape. But he has a good reason: a powerful mobster has been robbed of his priceless art collection and wants to retrieve it. Only a master thief could have pulled this job, and Kat's father isn't just on the suspect list, he is the list. Caught between Interpol and a far more deadly enemy, Kat’s dad needs her help.

For Kat, there is only one solution: track down the paintings and steal them back. So what if it's a spectacularly impossible job? She's got two weeks, a teenage crew, and hopefully just enough talent to pull off the biggest heist in her family's history--and, with any luck, steal her life back along the way.

Katarina Bishop has a life that many have never heard of; shes a con artist. It's a family business that has been going on too long to remember. She leaves the business to try and lead as normal of a life as she can have. But the handsome Hale brings here back and it's a good reason to. Her father is in trouble because an evil man named Arturo Taccone who says that her father stole his paintings. But how? That's what Kat and her team have to figure out otherwise something bad could happen to her father.....


Let me tell you all I was so excited to start this book. I mean come on a heist society how awesome is that, it's a very original idea which is what drew me in. (This is going to be kind of a short review fyi.) Kat was an interesting character and Ms.Carter has an interesting writing style. To be honest I wasn't particularly fond of it, she added so much that didn't have to be used. Regardless I didn't have problems reading the rest of the book its just it dragged on and was confusing.


I thought the characters worked really great with one another and I'm glad that I saw growth in them. Hale swoon was amazing seriously I would love to hear that story from his point of view! I liked Kat but I felt like I wasn't being told everything which I know cons are supposed to hide stuff but come on, its a book! Overall it was a great book I rate it 4 out of 5 stars. I will read the next one but will most likely check it out from the library. I still recommend you all to read it and if you have share with me your thoughts in the comments!

Toddles for now!
<3Ashlinn
P.s. I'm reading Hopeless Magic by Rachel Higginson
P.s.s If you have a a kindle and want an amazing free book here is the
link.
Posted by Ashlinn at 6:00 AM