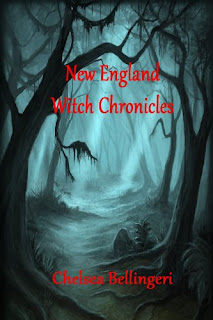 Pages:356 Paperback
Buy here
The Salem Witch Trials of 1692 were an embarrassing stain on America’s revered past. Innocent people were persecuted at the hands of a few over-zealous puritans. But what if there were real witches during those colonial hunts? What if there are witches in present day New England? That is what Alexandria Ramsey’s crazy grandmother believes. Grandma Claudia claims Alex descends from a long line of New England witches.

Modern day witches in Hazel Cove, Massachusetts? Unlikely, but strange things are occurring in the weeks preceding Alex’s seventeenth birthday, which also coincides with her family’s annual Halloween party. Alex is haunted by bizarre reoccurring nightmares of a man chasing her through the Hazel Cove Cemetery. On a few occasions, when her emotions have spiraled out of control, inanimate objects have shattered around her. But that’s just a coincidence, right? Alex isn’t so sure, especially after a local girl, who supposedly dabbled in witchcraft, was killed in the nearby forest.

Alex knows something strange is happening to her. With the arrival of a new boy in town, the mischievous James Van Curen, who is making her life difficult and causing problems between Alex and her best friend, Peter, Alex feels like her entire world is on the verge of chaos. Could Alex really be a witch? Is it possible Hazel Cove will become a battleground for modern day witches and witch hunters?

*Thank you Ms.Bellingeri for the copy*

The book takes place in modern day Massachusetts in a town very close to Salem, Massachusetts home of the 1692 Witch Trials. Alex's life has always been pretty normal she has a best friend named Peter who she's know since they were babies, supportive friends, but the one thing different is her family situation. She's never been close to her parents Emma and Victor Ramsey, in fact Victor and Alex almost hate each other. Her mother Emma is a drunk but the only supportive family member she has is her grandmother Claudia. Peter and Alex often visit her in Salem but lately things have been getting strange for Alex especially after her 17th birthday. Her Grandma Claudia tells her there's a family secret but can Alex really believe what Grandma Claudia tells her. After all weren't all witches in Salem persecuted.....?


Overall this book was well written and was a definite page turner. Even though it took me a while to finish the book when I could sit down and read it I read a lot! I absolutely loved Peter and Alex's relationship. I think every girl needs a guy like Peter to watch out for them. Unfortunately when James Van Curen walks in the picture things change. Characters start to change and Alex is stuck in the middle with some of it. As the story progresses you can't help but gasp in awe at some of the outcomes. I am still in shock at the outcome of the book.


My only problem with this book was the religious aspect I should have seen it coming but I really didn't. Anyways I rate this book 4 out of 5 stars you should check it out but just be aware that there are some religious points in there. The second book will be Conjured which should be ready December of this year for more information check out Chelsea Bellingeri's site.