Marked by P.C. and Kristin Cast 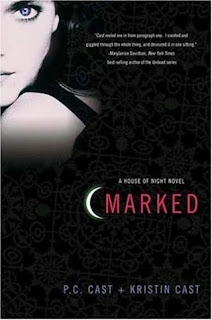 Published by:St. Martin's Press
Released:May 1,2007
Pages:306
Overall Rating: 4 out of 5 stars
From goodreads:
The House of Night series is set in a world very much like our own, except in 16-year-old Zoey Redbird's world, vampyres have always existed.  In this first book in the series, Zoey enters the House of Night, a school where, after having undergone the Change, she will train to become an adult vampire--that is, if she makes it through the Change.  Not all of those who are chosen do.  It’s tough to begin a new life, away from her parents and friends, and on top of that, Zoey finds she is no average fledgling.  She has been Marked as special by the vampyre Goddess, Nyx.  But she is not the only fledgling at the House of Night with special powers.  When she discovers that the leader of the Dark Daughters, the school's most elite club, is misusing her Goddess-given gifts, Zoey must look deep within herself for the courage to embrace her destiny--with a little help from her new vampyre friends.


This was my first time ever reading one of The House of Night let alone P.C. and Kristin Cast writings. I enjoyed this book a lot and it was a different change from the Vampire (Or Vampyre in this case)books I'm use to reading. Now I don't particularly agree with the main characters view on her morals but I loved how witty and smart Zoey was. The story itself was awesome! I really liked her roommate and all of the rest of them. I think that's what made me like this book a lot more....and last I really really liked Erik.Ohhh he sounded so sweet and charming and don't forget dashing!! Well I hope that this book series will keep impressing me and I hope to get Betrayed soon.