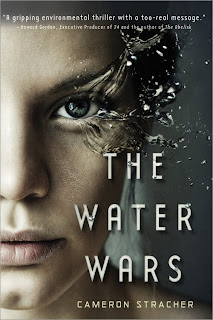 The Water Wars by Cameron Stracher
Published by: Sourcebooks Fire
Released: January 1, 2011
Pages: 256 pgs.
Overall Rating: 4 out of 5 stars
From Goodreads:
Vera and her brother, Will, live in the shadow of the Great Panic, in a country that has collapsed from environmental catastrophe. Water is hoarded by governments, rivers are dammed, and clouds are sucked from the sky. But then Vera befriends Kai, who seems to have limitless access to fresh water. When Kai suddenly disappears, Vera and Will set off on a dangerous journey in search of him-pursued by pirates, a paramilitary group, and greedy corporations. Timely and eerily familiar, acclaimed author Cameron Stracher makes a stunning YA debut that's impossible to forget.


Where to start with this book? I was very skeptical to read this because of all the negative reviews but also I just really wanted to give it a try. I realized that because I'm at a young age compared to some people who read ya books that the way we look at things are well different. Enough of the jabber onto the review:


Characters are always a big part in a book and for me I can usually find depth in characters pretty easily. My two favorite were Vera and Ulysses. Vera doesn't seem very feisty and stubborn at the beginning of the book but she eventually is. I really admired that she stood up for herself and kind of had an edge to it. From the first two or three sentences that Ulysses spoke I knew he was going to be a very nice pirate. I love the fatherly figure he has and how Vera can trust him.


The plot was interesting but the first three chapters Vera kept talking about water this water that and it soon got me very very thirsty :) lol. Did this happen to anyone else? The next thing that bugged me was the ending!!Uhhhh it was a really nice ending until the last two sentences uhhhh! I felt like Mr. Strahcer really rushed it because I wouldn't have minded reading 3-5 more pages. Anyways I give this book 4 out of 5 because it was really good and I hope he makes a series out of it. It has not been confirmed so don't quote me on that but I hope he does because there is some unfinished business.

Ashlinn!(:<3
P.s. I am currently reading Marked(1st book in House of Night)so we will see how that goes!

I really want to read this one!!
I adore the cover!!
I would've read this one sooner if it wasn't for the mediocre reviews. (:
Thank you for your opinion!

Perhaps if you have time, would you mind checking out my blog?
Thanks!
http://lovelylilbookworm.blogspot.com/