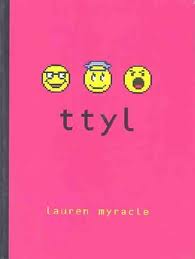 ttyl by Lauren Myracle
Published by: Amulet Books/ New York
Released: April 1, 2005
Pages:234 pgs.
Overall Rating:4 out of 5 stars
From back of book:
On the first day of tenth  grade, best friends Maddie (mad maddie), Angela (SnowAngel, and Zoe (zoegirl) vow not to let school stupidness get them down...or split them apart. But as the weeks pass and the instant messages accumulate, it's clear that tenth grade will be a roller coaster ride of boy temptation, math torture, donut emergencies, and Queen Bee encounters. Then a jerky boy sends peppy Angela into the dumps, tough Maddie makes a mistake that has the whole school talking, and good girl Zoe gets in over her head with a flirty teacher. Will the winsome threesome make it through the year?


My Review-
Well first off what I think mainly drew me to this book was the cover and name. As you know I am 13 years old and I use this kind of "language" as adults call it and I thought it was such a cute idea to write the book in text message terms. Now on to the charecters:


The most relatable character to me was Zoe because I'm kind of that good girl too but I'm not always like that you know. Angela was also a relatable character she was very funny and the crazy one of the group which some of my friends are :) love you guys! Now Maddie, she was my least favorite character she was just quite annoying at times and at others she was really sweet. Overall the charecters were awesome! The plot was interesting too but I can't give much details without giving the book away. Overall this book is a 4 out of 5 stars!