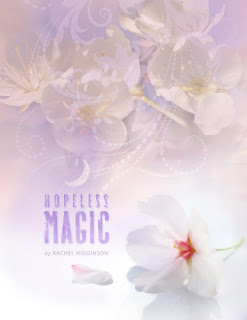 Hopeless Magic by Rachel Higginson
(#2 Star-Crossed Series)
Published by:Rachel Higginson via Smashwords
Released:August 10th,2011
Pages:Ebook
Buy here
After returning home from Romania, and successfully saving her best friend Lilly, Eden Matthews must now come to terms with her future as an Immortal. She is in love with the Crowned Prince, but he is betrothed to someone else. Her family desperately wants her to join their rebellion, but that would mean fighting against her one, true love, Kiran Kendrick. She must fight off assassins that want her dead, an Immortal rite of passage that takes her to India and a deadly disease that no one has thus far survived. Danger seems to lurk around every corner as Eden struggles to keep her true identity a secret and protect those that she loves. Eden must find a way to be with Kiran, or turn her back on him forever and fight to save her people. Hopeless Magic is the second installment of the Star-Crossed series.

*This was sent to me but that does not effect my review*
Here is the first book Reckless Magic review.
I was so excited to start this because I had high expectations from the first one and let me say this totally went above and beyond!

As I said above this was even better than Reckless Magic! Ms. Higginson has a wonderful and vivid writing style that I love. Seriously she should be more recognized. Eden, the main character is one of the most realest characters ever. Don't get me wrong her friends are wonderful as well. Eden is seriously just like a teenage girl; she complains, falls in love to easily, and is still trying to find herself, like many other teenagers. If you read my review on Reckless Magic you will see I left the book liking Kiran a lot but I have changed my mind and don't like him for various reasons which I won't reveal.Hahaha anyways there's not much more to say except that I rate this book 5 out of 5 stars! Seriosley go check out Reckless Magic and for that matter Hopeless Magic as well.