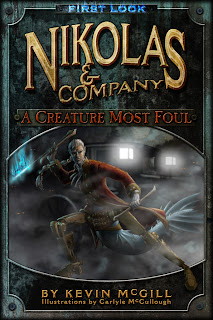 Nikolas&Company: A Creature Most Foul(First Look) by Kevin McGill
Published:Aero Studios
Released:June 30th,2011
Pages:137 PDF
Order here
"The Rones lie about their true intent. They enter the city of Huron at the peril of us all."

Every steward has a city and every steward hears the voice of the city. Fourteen-year-old Nikolas Lyons has heard the voice of Huron and she will change his life forever. Nikolas and company are transported to a time when Earth is tethered to the fantastic world of Mon – or as we have come to call her, the Moon. He learns that Mon is filled with fire-breathing winged lions and volcano born nymphs and magic so thick you can breathe it. But not all things are grand and beautiful. While aboard the Mottled Craw and in route to Huron, Xanthus is poisoned by a mysterious creature. It is not long after Nikolas understands that his friend's poisioning and the evil brought on by the Rones are one and the same. Never one for responsibility, Nikolas finds himself tasked with finding a cure for a dying Xanthus, while protecting the city of Huron from the mysterious creature most foul.

*I was contacted by the author to review but the review is all my own opinion.*
My Thoughts-
First I just wanted to say that this was not the entire book it was just the first 100 pages.

The book is very light and easygoing. The characters are enjoyable and they make a great team!My fav character is Caroline, she seems like she would be a genuine person and how awesome would that be to have a friend who could cook you anything you wanted?My only problem would be the beginning, it was somewhat confusing and I felt a little random? But from what I have read of the book, it's really great! Can't wait to read the rest! So what did I give the preview? 4 stars!The book will be released September 15,2011 and you can go to the official website or the link I provided at the top of this post to order the 100 pages for FREE! If you do order it, it will be released to you on June 30th!

P.S. Here is the official website
and here is the trailer for the book!Check it out!
And Happy Reading!!!:)
Posted by Ashlinn at 12:00 AM

I just reviewed this book on my blog too! I also read the first 100 pages. I agree with everything in your review - that the beginning was slightly confusing and the characters were enjoyable.

If you would like to see my book blog here is the link: http://onceuponabook-rachel.blogspot.com/