I have been lucky enough to interview Anne Tibbets author of The Beast Call! Here is my review of the book!

On to the interview! 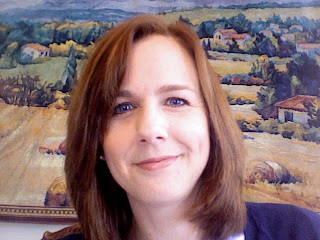 
Q:Where did you get the idea for your book?
A:There was a time when I was playing World of Warcraft quite a bit.  I haven't played for a little over a year now, time doesn't allow anymore, but when I was playing I absolutely loved the Druid class.  Druids in WoW can transform into other animals, and then use special capabilities specific to each animal (ie. Bear form for strength, cat form for stealth).  Though I wanted to pay tribute to the World of Warcraft druid, I didn't want to copy it exactly and I didn't want to have the heroine turning into animals, it reminded me too much of the Animagi in the Harry Potter series. So, instead, I took the idea of communicating with the animals telephathically and worked off of that.  The powers came to me first, then I created Dray to possess those powers, and then the world of Madis was born.
Q:Did you incorporate personal experiences into the book?

A: Not this book.  This one is pure fiction.  It can be quite liberating to start completely from scratch.
Q:What's the best thing about being an author?

A:The best part of being an author, for me, is the moment when you go back and read something you've written, be it written only the day before, or a year ago, and it touches me in an emotional way.  Either I get excited or sad, whatever, but if the words move me, I feel that makes the hard parts of writing, the rewriting, the editing, etc., worth while.  My great hope, is of course, that when someone else reads what I've written, they have a similar reaction to mine.
Q:Who is your favorite author(s)?

A:This one is tough.  I have a great many favorite books, but there's only one author I've read (so far) where every book she has written has been awesome (to me), and that's Jane Austen.  I've read "Pride and Prejudice" about a half dozen times, and "Persuasion" at least three times, plus all her other titles at least once.  She can tell a story like none other, and she understood the social limitations of women in that era, and was able to dramatize them superbly.  Whenever I'm feeling writer's block, I read Jane Austen.  Works every time.
Q:What projects are you currently working on? Do you have any others you want to do in the future?
A: I am currently writing a dystopian entitled, "The Line."  There is some question as to whether it will be a young adult book because the heroine is a former s*x slave, and the content can get a bit disturbing.  I'm in the process of re-writing part of it now.  As for the future, I plan on e-publishing the sequel to "The Beast Call," entitled "The Beast Reign."  I'm half way through writing the first draft.  I hope to have that out by Christmas, 2011.  Fingers crossed!

Thank you Anne! I hope you have enjoyed the post!

Thanks Ashlinn. It was fun!

If you would like to see my book blog here's the link: http://onceuponabook-rachel.blogspot.com/2011/07/nikolas-and-co-creature-most-foul-by.html