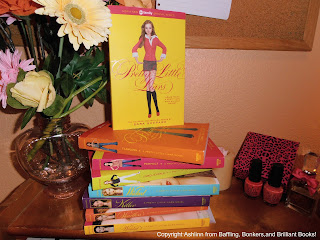 
After almost a year I have finally finished the first eight books in the Pretty Little Liars series! When the trailer for the show started showing, I think a lot of people started to read the books, myself included!

The basic storyline is: There are four girls; Aria, Spencer, Hanna, and Emily. There use to be five but their leader Allison DiLaurentis was murdered. The four girls are being harassed by someone named "A" who happens to know all of their deepest and darkest secrets that they only shared with Ali.....but wait isn't Ali dead?

The show vs. The books-
You know how most books are 100x better than the movie or show well... in my opinion the show is just as good! The actors are amazing!!!! The writers of the show did take a different turn from the books. It is said that "A" in the show is different from "A" in the books. Plus the book has so many more characters that will either be in or out in the show.

So what did you think.....?-
Overall grade of the series A or a 4.7 out of 5 stars! Overall I think my favorite character would be Spencer. In books 1-4 Emily and Spencer annoyed me the most but I really came to like Spencer!I had my moments with Emily where I would be yelling at her while I'm reading especially in the last book.....I liked Hanna as well as Aria they were both so interesting and I felt so bad for both of them at times. To this day I still despise Hanna's dad!

When I first started reading the first two books there was so much unknown to me so I did the unthinkable! I looked up the summary of every book on wikipedia! So by the third or maybe fourth book I knew what happened. I took breaks in between books so I somewhat forgot what happened but believe me I was still shocked at the end!

What about the other books?
Sara Shepard has announced that four more books will be added to the series starting with Twisted which will be released July 5th! Then I read that the next book will be Ruthless which will be released December 6th this year! I don't want to give to much away about what happens in the end but what else can she write about in the new books??  Regardless I'm obsessed with the series and will continue to read them!

I wanted to do this whole overview because I didn't want to give away any spoilers. I hoped you enjoy this post and try to check out the books!