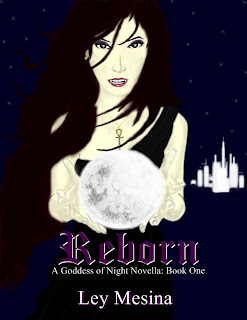 Lily Westbrook knows she is anything but ordinary. When her powers fully mature on her eighteenth birthday, she realizes that being half witch and half vampire is more of a challenge then she was let on to believe.

After being accepted to Kensington University in Cedar Creek, Massachusetts, she sets out on a journey that pulls her deeper into the world of witches and vampires, uncovering the truth about her past and discovering who she is meant to be.

*I was contacted by the author to review but the review is all my own opinion.*

Reborn is an awesome first novella! Reborn follows Lily, a half witch half vampire(how awesome!), trying to find her parents that are supposedly dead while learning how to control her powers.The first couple of chapters were confusing character wise. We were introduced to many different characters in a short amount of time and at times I had to stop and think who this character was related to. Lily was great but I wish I would have gotten to know her feelings better but I think as the series progresses she will as well. I loved Aunt Trudy, she was the type of motherly person everyone wants in their life! I'm also excited to see how the romance between Roxy and Drew, and Xander and Lily progress!I wish that the book would have been longer, but it's a novella so it's supposed to be short! It's perfect for the vampire/wizard lover!My overall rating is 4 stars!

P.s. Ms.Mesina has said that the second book should be out at the end of the summer!