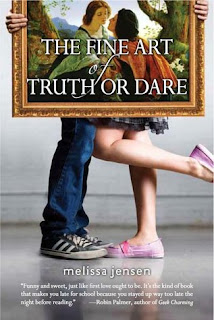 The Fine Art of Truth Or Dare
by Melissa Jensen

Ella is nearly invisible at the Willing School, and that's just fine by her. She's got her friends - the fabulous Frankie and their sweet cohort Sadie. She's got her art - and her idol, the unappreciated 19th-century painter Edward Willing. Still, it's hard being a nobody and having a crush on the biggest somebody in the school: Alex Bainbridge. Especially when he is your French tutor, and lessons have started becoming, well, certainly more interesting than French ever has been before. But can the invisible girl actually end up with a happily ever after with the golden boy, when no one even knows they're dating? And is Ella going to dare to be that girl?
The Fine Art of Truth or Dare sounds like a cute read and it was but it just wasn't as good as I expected. The first couple chapters we're introduced to Ella an art junkie who is in love with Edward Willing who happens to be dead. And her two best friends; Frankie and Sadie. I loved Frankie he was one of those characters you can't help but want to be friends with them in real life. Sadie I felt like we didn't get to know her as much as Frankie but I still liked her. Ella's like any other love struck teenage girl. She likes this guy Alex Bainbridge one of the most popular guys at Willing. I didn't really think much of Alex because I was sort of in and out of the book but in the end I neither liked him or disliked him. He was just kind of blah. He's pretty much like another stereotypical athletic-boy-who-is-dating-the-most-popular-girl-but-who-then-starts-to-fall-in-love-with-the-quiet-invisible-girl-and-makes-her-feel-special. Not that there's anything wrong with that but it's just so overused. Overall this book was ok it was pretty long for my taste but I rate it 3 out of 5 stars.

I didn't know you were back blogging - so sorry for not commenting on your posts!

This book sounded quite cutesy when I first heard of it but it's not really a book I would ever pick up. It's a shame you found the faults that you did and, I agree, that storyline is quite overused - in both books AND movies!

Here I take great information, I am a good reader and blog reading me hobby. Basically I am a wondered for good knowledge here and there this blog very sportive for me every point of view.

Thanks for shearing huge knowledge
Estetik

Good post with great explanation. Way of writing and convincing is glorious. Eyes on the topic like Arjun’s eyes. Seriously I never read this kind of post ever.
Yüz Germe

On my list it goes! Your book review was really awesome i have some reasons to get this book and enjoy it.

Great review! I've been waiting to read this book, it sounds like it might be a good one.

I had not any thought mcdougal experienced a whole new book available so thanks regarding sharing this magnificent protect around and sharing with me about a brand-new book! We never have study Audition although I've truly study a lot of put together ideas so I am just fascinated to determine what people visualize The actual Sound connected with Allowing Move; ).

Get Income From A Part Time Assignment Entry Jobs Best Way To Make Money At Home
Best Way Of Earned Money For Student Online Data Entry Jobs
Now Offered To All Those People Who Want To Earned Money By Work At Your Home
More Detail (Http://Tinyurl.Com/3gce3ot) IDS (11621)