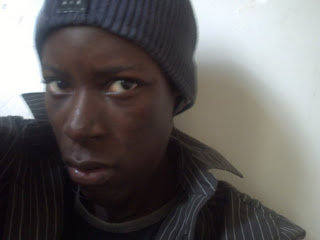 Why did you pick the name Ves Asirin?

In a lot of the novellas and scripts I wrote back in High School, my characters either had generic/normal names like (Ryan Thompson and Erica Lynn) or code names for their real names (Sinder and Seth Electric) and I wanted to write about a character with an exotic name. I remember watching a documentary about Buenos Aries,  which is a city in Argentina, and I instantly fell in love with the name. For the longest time I played around with letters in the alphabet and finally came up with the name Ves Asirin.

And does it have a meaning?

Unknown to Ves himself,  'Ves Asirin' is not an actual name but a title; a set of words that, in the angel language of Kapriseik, means 'He whom Elohim sent us towards the very end' or 'The God-sent' in short.

Where did you get your ideas for this book?

Tower of Parlen Min is actually a merger of two stories I was working on back in 2006; one called The Narrow Escapes of Ben Benns and the other called The Tower of the Great Few. The latter is what inspired the  main plot in Tower of Parlen Min and it was inspired by a nightmare I had which was a bizarre mash-up of the Charlie and the Chocolate Factory and House on Haunted Hill movies.

I decided to turn the story into a series of novels after reading Harry Potter and the Deathly Hallows and was disappointed with the ending. Of course even at that point it was pretty much just in the idea space until I saw a music video by one of my favourite rock bands, AFI, for their single Love Like Winter which inspired the idea for Ves' Dark Teenage Girl.

I started writing the book seriously shortly after seeing that video, laying out the chapters was the first thing I did creating a template for all the ideas of the things I'd wanted to write about; puzzles, tasks, haunted buildings, magic, paranormal creatures, mysterious killings, fantastic and action packed battles.

It was a slow and difficult start but after The Sword Challenge chapter, the book suddenly came to life and pretty much wrote itself to an ending that shocked even me.

Have you always wanted to be an author and if not what did you aspire to be?

No, I never wanted to be a writer and it was one of those accidental and 'blessing in disguise' type of things. What I wanted to be when I grew up was be an IT specialist; a software programmer or a web developer.

I'd always loved literature and the visual arts, and I'd say until I was 16, I was more of an artist. A lot of the writing I did at that time were plots and scripts for my comic books. But during and after High School, my writing really took off. I finished about 6 to 7 180 page A4 notebooks by the end of 2006 writing stories about Ryan Thompson; a 12 year-old boy with the ability to manipulate energy and matter. And that's when I started getting hints from the universe that maybe this was a long-term thing.

What are your current or future projects?

Well, first on the list are series of novellas set in Everlon (Ves' world) which will be introducing some characters that feature in later books of the series, some from the series distant past. Some will be free for download (or set your own price) and some will sell for only 99 cents. Then, I think, I'll start writing Ves' second book, Eclipse Over Atuwis Wood, in April 2012, that'll take about a year to complete and release.

I also be writing plots for a few new stories. Drako: The Dark Magian, which will be about practical stage magic, will be aimed at younger readers (8 - 12 years) and I might pitch this one to Literary Agents and Traditional publishers and see what they make of it. Because, and I think a lot of the readers have noticed, that Ves Asirin is more for boys and young men than it is for girls and young women, I'm working on a concept (not titled yet)  for a paranormal romance - mystery drama/thriller (I dunno if that makes sense) with a female protagonist with psychic abilities who is also a skilled tarot card reader.

Also I'll be writing a free online comic with my Bro, The Red Plus (one of the cover artists) called The Griven which is sort of like the X-men comics but more humorous and in a Junior High setting. The last project I'll be working on, if Ves lets me, is an Alternative Reality Game (not titled yet) which will be like the Amanda Project (if you haven't heard about that you should Google it -- its awesome, though its more for girls).

What are you currently reading?

Treasure Island; it came free with the Kindle software for my PC. Can you believe I never read that?


Thank you so much Matt!And thank you all for reading, if you are interested in a giveaway for the book the links to enter are on the Review and Guest Post!Go check it out!
Posted by Ashlinn at 8:15 AM

Novels On The Run said...

Nice to know a bit more about Matt Xell:D