Review: Quest of the Demon 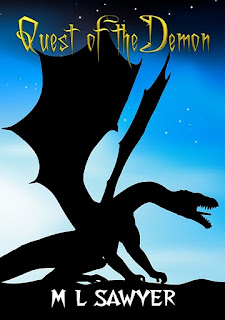 Quest of the Demon by M L Sawyer
Published by: M L Sawyer via Smashwords
Released:January 28th,2011
Pages:277 e-book
Buy here
Darci is a popular sixteen-year-old girl who plays basketball and lives in an ordinary country town. But her life is changed forever when she is accidentally transported to the land of Nahaba by a young apprentice wizard called Taslessian.

Within hours of her unexpected arrival, both teens are thrust into a dangerous journey to the cave of Grisham the Great in the hope that he would be able to send her home.

Upon reaching the cave, however, Darci quickly discovers that there is no such thing as accidents, and that their journey is only just beginning.
The Quest of the Demon has begun.

*Thank you Ms.Sawyer for sending me a copy.*


My thoughts-
The book starts out when Darci is brought to another world by an inexperienced wizard named Taslessian. They quickly figure out that she is in a lot of danger because an evil wizard wants to capture her so he can become stronger and do more evil things. The classic evil wizard trying to take over the world. Along the way they run into trouble and then they meet the powerful dragon Grisham who tells the two that a war is going on between the North and South and they will have to participate in it.


Overall I thought the book was pretty good. Some parts kind of drug on especially the parts leading up to the battles. I liked the relationship between Darci and Taslessian, and I'm interested in how it will progress. If you are looking for a fantasy novel with interesting characters and quite a bit of action you have found your book. I rate this 3 out of 5 stars!

hey! new follower!! I love your blog and look forward to your posts! hope you will stop by mine and follow me!

I have the fever cover reveal and a HUGE international giveaway with signed books going on to support the fight against cancer! =]

Hi Lindsay!Thank's for stopping by and subscribing!I also love your blog as well and I think the giveaway is an amazing idea and I am going to make a post about that!You are such an awesome person!<3 Ashlinn