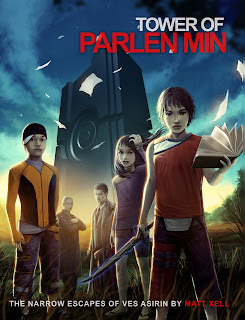 
Published by:XLA Publishing Group
Released:July 23, 2010
Pages:375 e-book
Buy: here
Amazon links:
Volume 1
Volume 2
Volume 3
Ves Asirin, an orphaned and introverted boy with a complicated memory loss disorder, wins a trip to the TOWER OF PARLEN MIN, the home of the wealthiest inventor of the time, Jacobius Trent. There, with 19 other children, he must compete in the Sword Challenge; a series of intricate puzzles and daring tasks, for a prize of $12 million. As dazzling, glorious and liberating as the Tower seems to be for him, Ves finds that it keeps a dark and secret history that he has been unknowingly connected to for over 150 years, a secret that will define his future and destiny ... if he can escape The shadow; a powerful and seemingly unstoppable, supernatural serial killer.
My Thoughts-
This book follows Ves Asirin an orphan who suffers from a memory loss disorder. I liked Ves in the beginning and I did feel sympathy for him, but when he arrived at the Tower he turned into somewhat of a jerk. But the one trait I admired was that Ves was always up for an adventure and liked to learn new things.But many times he would get himself in trouble with the adults and children while doing that.

I only had three problems with the story and the writing. There was a fair amount of grammatical errors throughout the book. Second, we were introduced to all 19 of the children at once, and they were all described at once.Now thinking about it, I should have wrote it all down so I wouldn't be confused.Third, some parts where really slow and others happened very quickly. That wasn't a huge issue though, now onto the things I liked!

First I just want to say I give props to Matt Xell and his team for all the research they conducted! Probably my favorite part was the sword fighting. Those scenes were described awesome!There was so much detail and I learned something about jousting! Second, there was a couple parts that included some mythology and if you didn't know I'm a sucker for mythology specifically Greek which it did include a little of.Third, the wolves and their language, I thought it was a great idea and I liked that the wolves weren't really as they seemed....

Bottom line, the book is a good read although it is quite long,it's perfect for the reader who loves fantasy. I rate this 3 out of 5 stars. So if you want to try this book out you are in luck!I will be giving away five copies for free!!!


Thank you Matt Xell for sending me the book to review.
Click the link to have the chance to win Tower of Parlen Min!Click here Contest ends August 2nd,2011

There a warning at the beginning of the book:
Reader Beware. This is a book about life and death and the reality of it all. It
contains scenes and themes that may not be suitable for readers under the age of 14.

Also don't forget to check out an Author Interview and a Guest Post! 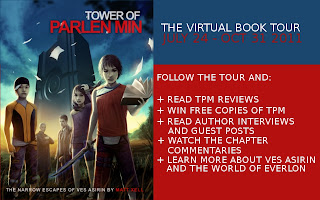