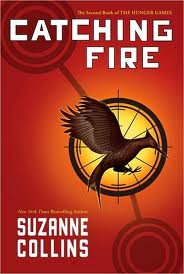 Catching Fire by Suzanne Collins
Published:Scholastic Press
Released:Sep. 1st, 2009
Pages:391 Hardcover
Buy here
Against all odds, Katniss has survived the Hunger Games. She and fellow District 12 tribute Peeta Mellark are miraculously still alive. Katniss should be relieved, happy even. Yet nothing is the way Katniss wishes it to be. Gale holds her at an icy distance. Peeta has turns his back on her completely. And there are whispers of a rebellion against the Capitol- a rebellion that Katniss and  Peeta may have helped create.
Much to her shock, Katniss has fueled an unrest that she's afraid she cannot stop. And what scares her even more is that she's not entirely convinced she should try. As time draws near for Katniss and Peeta to visit the districts on the Capitol's cruel Victory Tour, the stakes are higher than ever. If they can't prove, without a shadow of doubt, that they are lost in their love for each other, the consequences will be horrifying. Katniss is about to be tested as never before.

My Thoughts-
WOW!WOW!WOW!I'm so glad that I finally finished Catching Fire!

I'm sure many of you have read The Hunger Games series or at least the first book. I don't know about you guys but I think this book improved and was even a little better than The Hunger Games!

Characters: Katniss, Katniss, I love her! And Peeta, the boy who would risk everything for her. Side note: Did you know that his name Peeta is a type of bread but it's spelled Pita!How awesome, yeah most of you probably knew that but I didn't realize that until my dad pointed it out. Anyways back on track. Throughout the whole book I was trying to decide who I would join: Team Peeta or Team Gale. And yet I'm still stumped!Unlike Twilight where I was like: Oh yeah Team Edward right here!No doubt about it. But there's just something about these two that I can't choose between!Oh Suzanne Collins why do you make it so tough?!

The only criticism I have is, when the "plan" was revealed to us by Haymitch I thought it wasn't explained very well. I still gave this book 5 stars because the whole series is a fun read and hard to put down!


Happy Reading!
And if you have read the book which team are you: Peeta or Gale?
P.s. I won't be able to start Mockingjay soon because of others book I have to review!
~Ashlinn~

I haven't read any of the hunger game series so I can't help with the Team Peeta or Team Gale, lol.
Great review!

So glad you liked it! Catching Fire was Kristan's favorite of the series. You definitely have to read Mockingjay at some point, but it's definitely more serious and emotionally tough than the first two. Stephanie, Ingrid, and Sarah all like Hunger Games (book 1) the best, because it's the original!