Review: Anna and the French Kiss 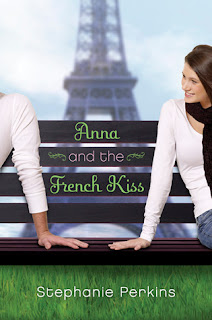 Anna and the French Kiss
by Stephanie Perkins
Published by:Dutton
Released on:December 2nd,2010
Pages:372 Hardcover
Buy here
Anna is looking forward to her senior year in Atlanta, where she has a great job, a loyal best friend, and a crush on the verge of becoming more. Which is why she is less than thrilled about being shipped off to boarding school in Paris - until she meets Etienne St. Clair: perfect, Parisian (and English and American, which makes for a swoon-worthy accent), and utterly irresistible. The only problem is that he's taken, and Anna might be, too, if anything comes of her almost-relationship back home.

As winter melts into spring, will a year of romantic near - misses end with the French kiss Anna - and readers - have long awaited?

Ok so I know it took me about a year to read this but I finally have, and boy was it fantastic! Anna and the French Kiss was the perfect mixture of romance,comedy,and finding yourself story. Anna was a charming main character. I found a couple of similar qualities between us.Let me just say I loved the tiny snippets of french history and the words! I seriously wanted to jump on the next plane and read the story while walking through the Paris streets to get the feel! And St.Clair.....what else do I need to say? He was just a ball full of hotness! Some production company should pick this up because it would be a fantastic movie! The bottom line here, I rate this 5 out of 5 stars!It was so great and  I will at least need to read this book once a year!


Have a fantastic week!
~Ashlinn

Email ThisBlogThis!Share to TwitterShare to FacebookShare to Pinterest
Labels: Anna and the French Kiss, Baffling Bonkers and Brilliant Books