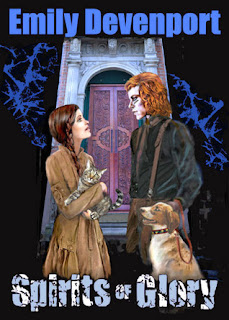 Spirits of Glory
by Emily Devenport
Published by:Smashwords
Released on:October 24th,2010
Pages:
Buy here
One morning the people of the North woke up and the people of the South were gone. That s the first thing every child learns on the colony world of Jigsaw. But for one girl, knowing about The Disappearance is not enough. Hawkeye wants to know why.

That's why she spent half her life researching The Disappearance. And that's also why eight Neighbors show up on her doorstep, demanding that she accompany them into the Forbidden Cities ruled by the Southern gods to speak with the Spirits of Glory. Everyone thinks Hawkeye is an expert on Neighbors, these almost-humans who move, talk, and think as if they were born inside one of the Time Fractures. But she can't imagine what they want to ask the ghosts of their ancestors, or why they need her to go along. The Southern gods caused every human inhabitant of the Southern cities to disappear overnight : what else might they do?


But the Northern gods say Hawkeye should go and her curiosity won't let her refuse, even though she's going into more danger than she can imagine. Pain and puzzlement wait along the broken interstate, along with scavengers who want to kill them all. Hawkeye's questions only generate more questions as they move farther and farther into the South, right into the heart of the Disappearance, until Hawkeye's questions have all been answered.

Even the ones she was afraid to ask.
*I received a copy for review, thank you Ms.Devenport!*


The main character is Hawkeye as everyone calls her. The one thing I admire about her is her selflessness. I love that she looks out for her animal friends and I thought it was incredibly adorable. There was also some romance and I approve of the guy Hawkeye likes. I also liked the spiritual aspect.The Neighbors are a huge role in the story. And no they're not actually like next door neighbors. They're kind of like messengers for the gods.  Anyways this story was really good and I rate it 4 out of 5 stars! Ms.Devenport has a nice writing style where you don't have to add in 10 words to a sentence to be more descriptive.Check it out on smashwords.
Posted by Ashlinn at 6:00 AM