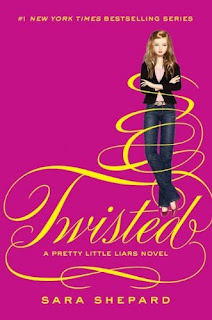 
Published by:Harper Teen
Released on:July 5th 2011
Pages:305 Hardcover
Buy here
It’s been a year since the torturous notes from A stopped and the mystery of Alison DiLaurentis’s disappearance was finally put to rest. Now seniors in high school, Aria, Spencer, Hanna and Emily are older, but they’re not any wiser. The Pretty Little Liars have more secrets than ever - twisted secrets that could destroy the perfect lives they’ve worked so hard to rebuild.

Worst of all: Last spring break in Jamaica, they did something unforgivable. The girls are desperate to forget that fateful night, but they should know better than anyone that all secrets wash ashore … eventually.
*I Would not recommend reading this review if you have not read the first eight books my review of the first eight can be found here.*

I'm so glad that I finally got to Twisted. I was kind of waiting to read it when the show came back on but I decided to just read it! As many of you know I am a big PLL fan and I was excited to see new books but like many others the question is why?And what will it be about, but Sara Shepard created a great story.


Basically after a trip to Jamaica the girls have made a huge mistake that for me was also a shocker. Twisted is set in the present but with the flashbacks from Jamaica which are really important. The more I read, the more I loved the girls. Each one of them have their own individual story and mistakes which makes it interesting. Bottom line; loved it!I rate this 5 out of 5 stars! Ruthless(#10) will be out December 6th 2011! I can't wait!

Thanks for reading and have a great day!
Ashlinn
I made a Twitter!!Link here